I have a post coming up about various weekend adventures I’ve been having (sneak preview: goats!) but first I thought I’d share a bit about everyday life. 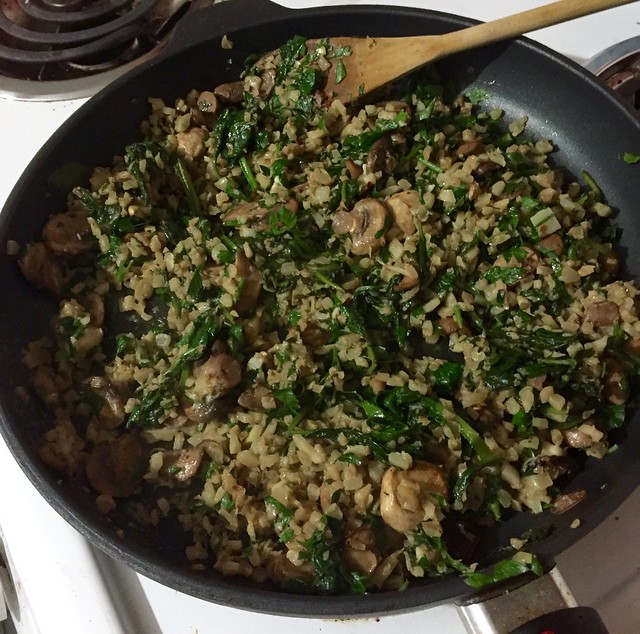 I created something yummier the second time I made cauliflower rice. It was also a clean-out-the-fridge situation. I sauteed the remaining cauliflower rice in some olive oil with some cloves of garlic. Then, in more olive oil, I sauteed some mushrooms. Then I added some baby spinach, chopped up, and let that wilt. Returned the cauliflower rice and added a bunch of parsley and various small quantities of cheese I had in my fridge (dude, when am I not eating cheese?!)

It was pretty good; fresh herbs are great. It was even better the next day with two fried eggs on top 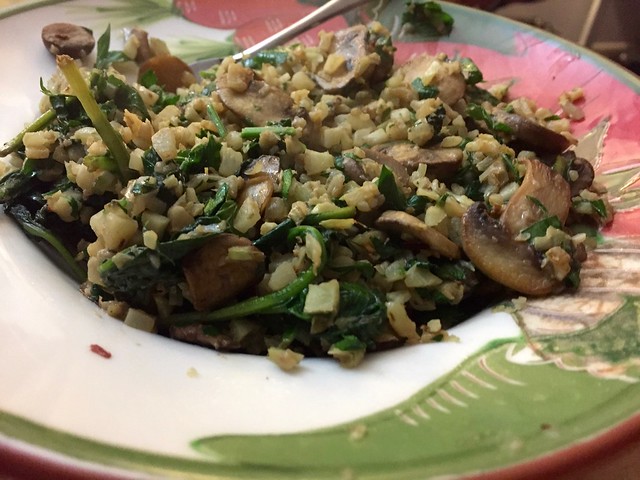 I wasn’t able to take a picture of this but I made these soy sauce eggs and they were SO delicious. I also halved the recipe for the marinade and it was still enough to cover the eggs (I used a narrow two cup Pyrex liquid measuring cup both to make the marinade and then to soak the eggs, which worked well for submerging things). 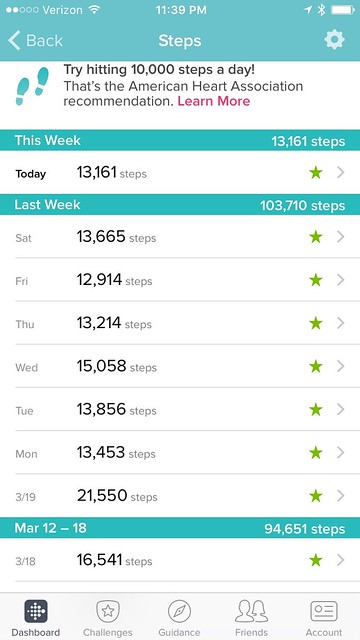 I’ve been taking more glorious springtime walks. I’m so into these little blossoms- I think two different types of cherry trees have been doin’ it! 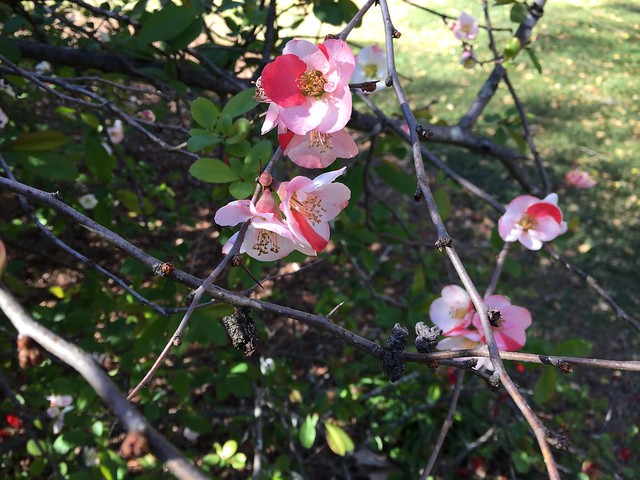 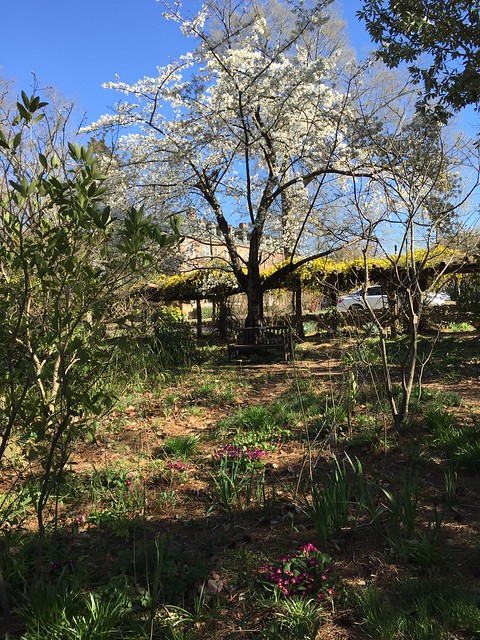 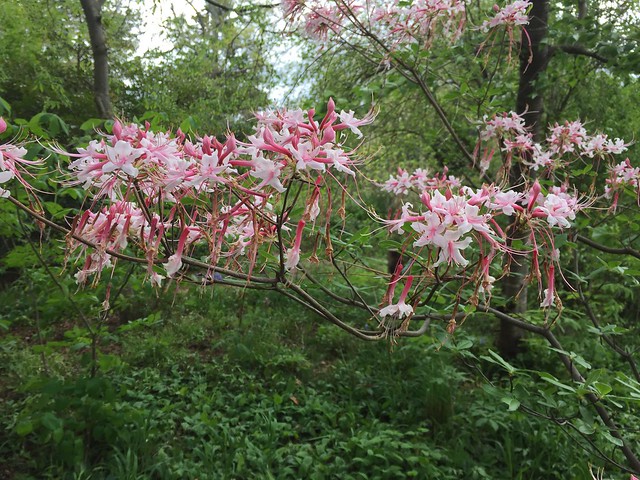 I had a sore throat and got this udon noodle soup at my favorite sushi place. The owners are so so sweet and are always happy to see me and have an adorable little boy named Philip who hangs out there.

Getting this was 90% about the delicious broth. 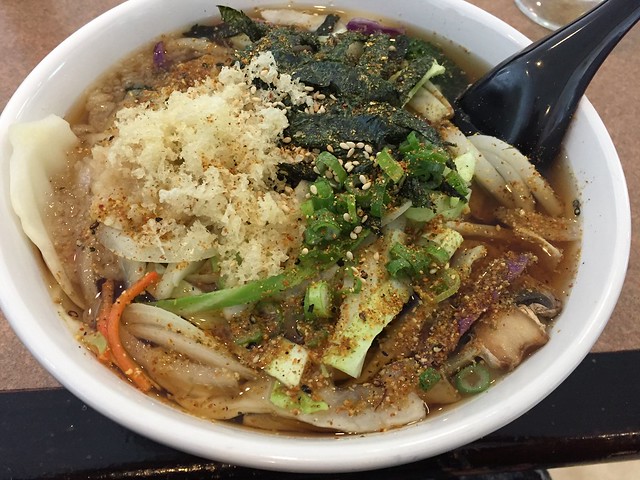 Another soup-craving day, I got this LEGIT ramen at Whole Foods. They are really trying to be a one stop shop for everything ever. I’m actually really mad at Whole Foods because they didn’t do an April Fools Day prank this year like they did in previous years. My cousin’s actually one of their web developers and I texted her being like “!!!! what happened?!” and she said pranks are the true victims of layoffs. SOBBING.

That was a tangent, this was yummy ramen and really kicked off my craving for soy sauce eggs. 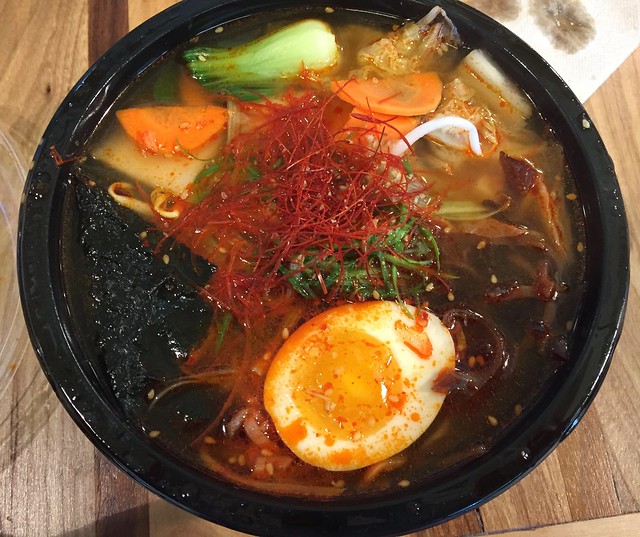 Then I was on campus for a free film screening and stopped to get this Mediterranean Deli platter that I got ALL THE TIME when I was still in school. Big blob of baba ghanoush, big blob of artichoke parmesan dip, their dreamy homemade pita, and a couscous-chickpea-raisin salad (they overdo it on the raisins so I don’t eat them all). 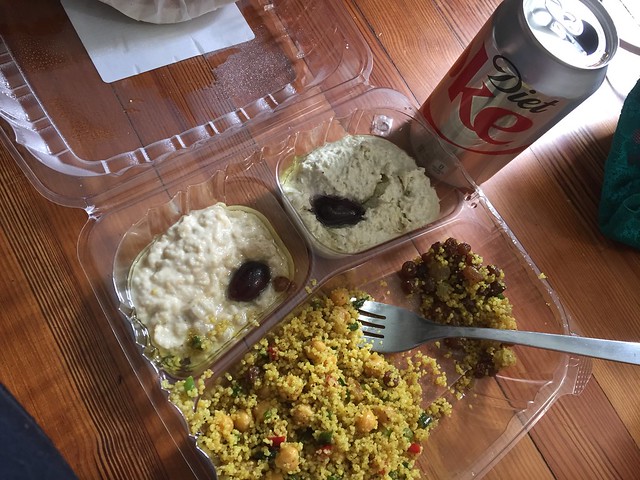 The Chapel Hill Public Library is a huge part of my self care. Love them. Some recent selections include:

International Women’s Day was widely celebrated in this area. I was hanging out at Weaver Street Market waiting to meet a friend and witnessed three awesome generations of women. 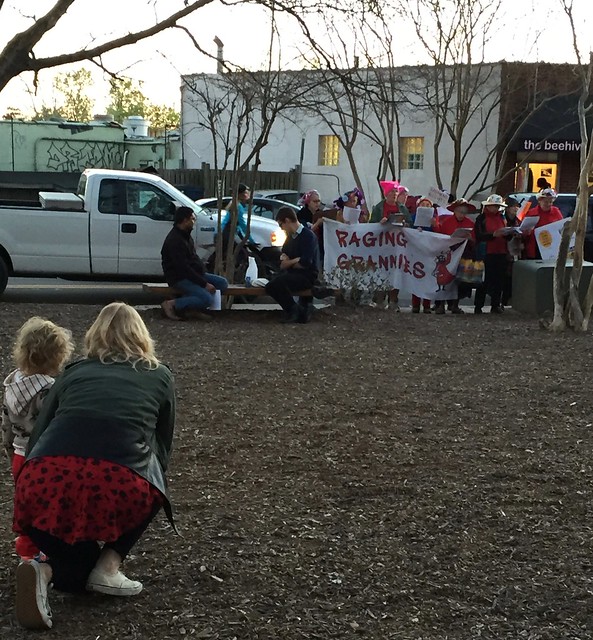 Speaking of chicks (😂 ) I’ve been visiting these little baby guys at the local garden store on an almost daily basis. THE PEEPING! 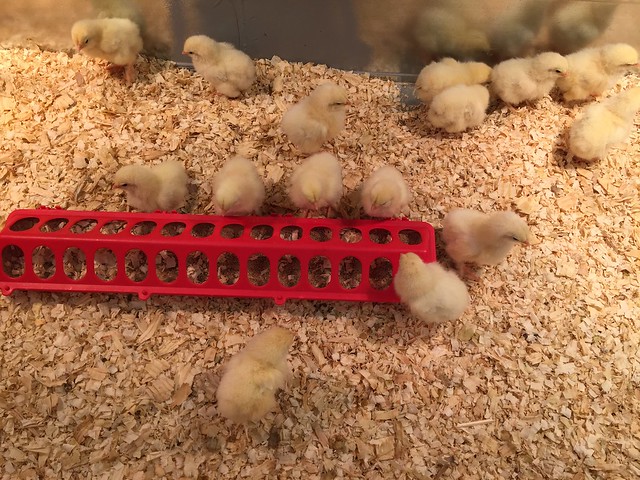 When they nap they do the weirdest thing with stretching out their necks. I guess it’s comfortable when you’re a chicken? 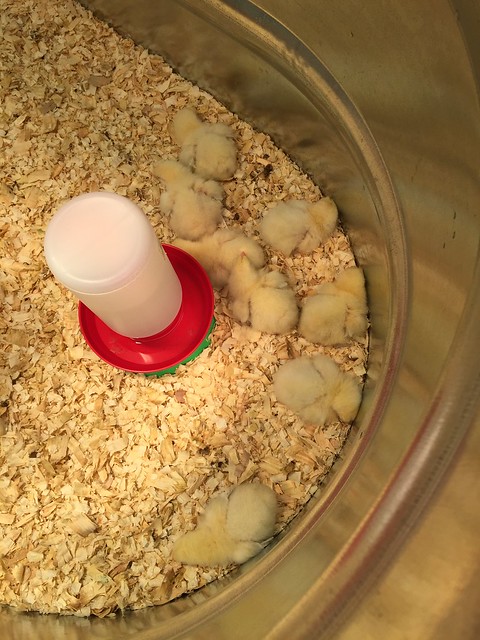 Here’s a bizarre experience I had: my lovely roomie Alli kindly invited me to join her and her crew for some low-key Tuesday night karaoke. I happily accepted the invitation and, seeing a crowd of only five people or so at the bar, signed up to sing the always-classic Tainted Love. Butttttt as the person before me finished his performance, an ENTIRE BUSLOAD OF PEOPLE GOT DROPPED OFF AT THE BAR. As they poured in, the emcee announced “And up next, we have Ileana!”

I mean it’s totally fine because my soul left my body and spent the next four minutes on the ceiling of the bar. No idea what happened. 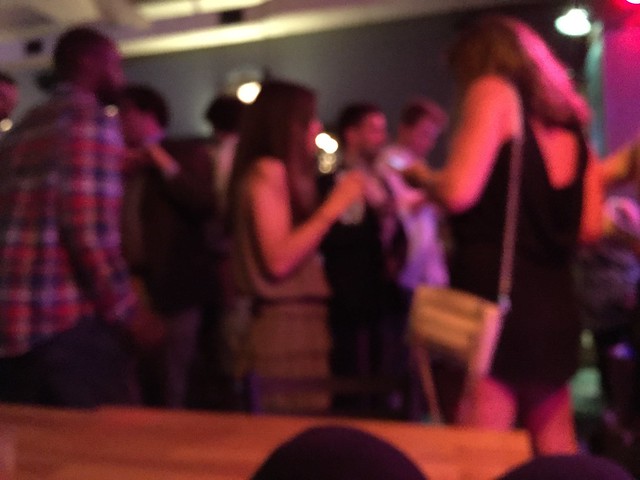 Things were quite exciting for awhile there in Chapel Hill because of basketball-ing. 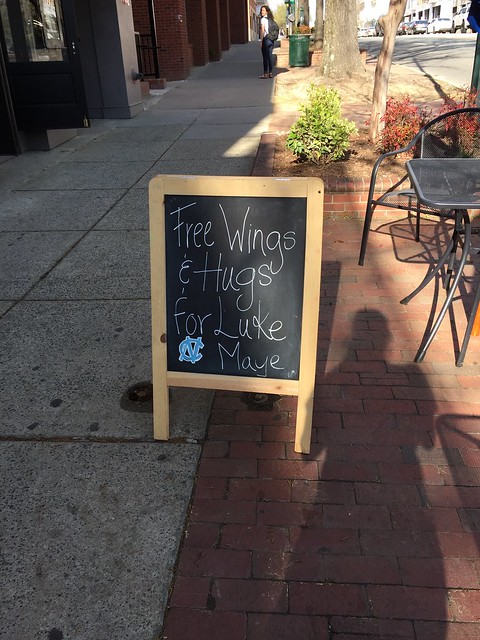 I honestly wasn’t even going to watch the NCAA championship game but Kyle and Shay, who are new in town, asked me if I knew anywhere cool to watch it. I have an old friend who used to work the door at a bar on Franklin Street, so I hit him up. He no longer works there, but told me that they’d be showing the game at the planetarium for employees and friends and I could probably get in, so I did some more strategic texting with another old planetarium buddy and yes, we were invited! SO, off we went. 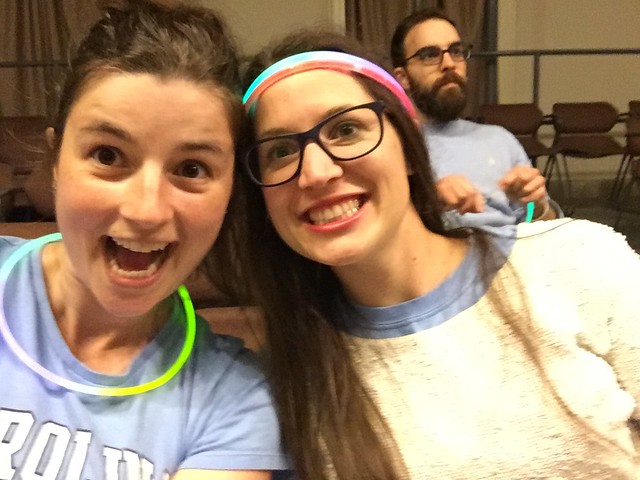 This picture is ridiculous and I LOVE IT. I started to feel insecure about the size of my head because Shaylen’s glow sticks made these adorable hippie headbands for her but would not clasp around my enormous noggin for the life of me.

It ended up being amazing being at the planetarium because when UNC WON HOLLA HOLLA HURRAY, we were right there on Franklin Street and ran out into absolute bedlam. 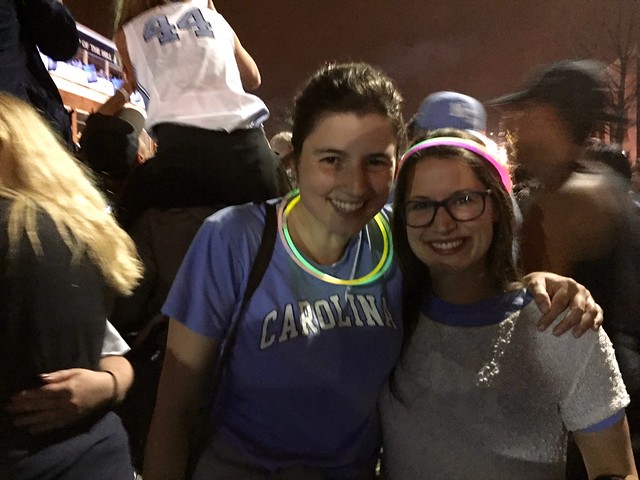 We only stayed for a few minutes (we saw the fireworks but not the bonfires, hahaha) but it was nice being caught up in that kind of happiness.

The next day, the sky shone a beautiful Carolina blue. And it was free cone day at Ben and Jerrys! Just such a confluence of happiness in downtown Chapel Hill!

(I opted out of the ice cream. I’m not 18 anymore. I can’t wait in line that long. For the record, it stretched around the next block. This pic shows about a third of it). 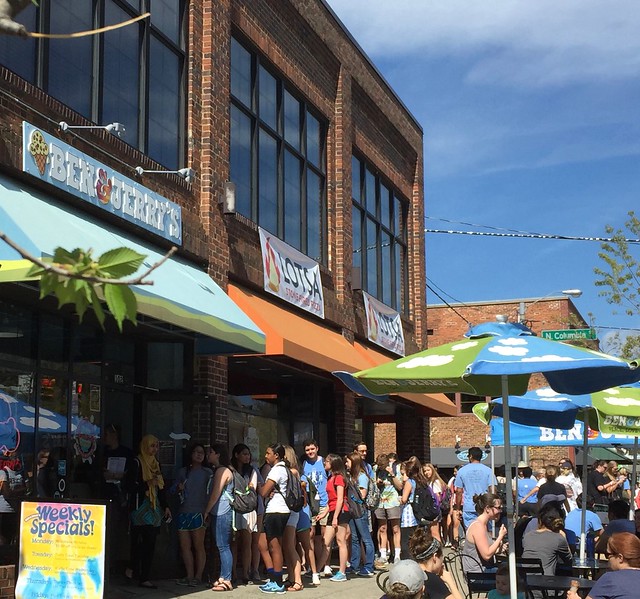 This is what you see after a rain storm. 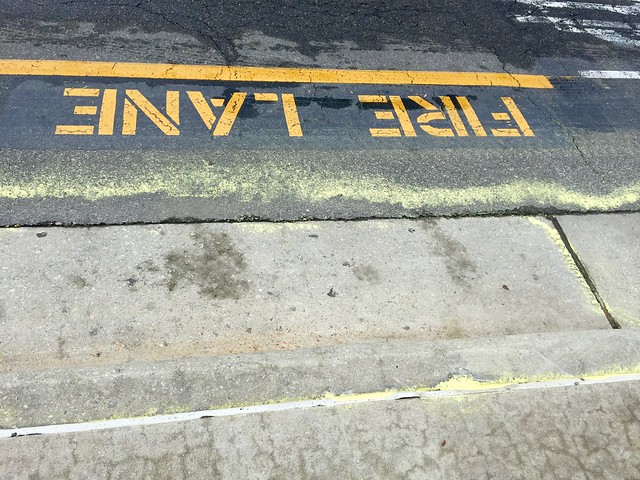 So. much. tree sperm. Ugh. Sneezing and itchy eyes and runny noses abound. I actually think my allergies are slightly better this year (profuse knocking on wood), and along with the Claritin D I take daily (which is good but STUPID expensive and a real pain to buy because with the fears that you’ll use it to make meth you can only buy like 20 pills at a time), I partly attribute the improvement in allergy symptoms to having a cat living in my home for the first time since I moved to NC. Children who grow up with pets in the home are less likely to have allergies. So it’s not that much of a stretch?! 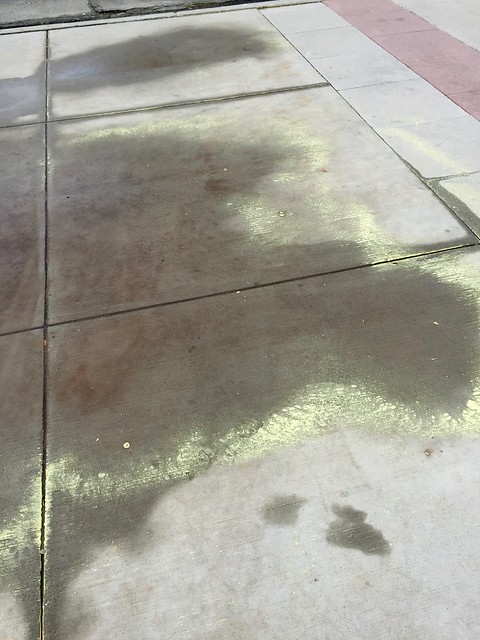 I’m also annoyed because I got a new kind of flea medicine for my little cat and she seems to really hate how it feels on the back of her neck (she ripped off and destroyed her collar). It also smells bad. I have a literal Smelly Cat.

I took those pollen pics by the movie theater where I went for a spontaneous Tuesday morning viewing (with one friend who works irregular hours for a moving company and another friend who works irregular hours as a legal economics consultant) of GET OUT.  My roomie saw it first and recommended it and also pointed out that once you see it you can then read all the think pieces all over the Internet about it. Which is always fun! I did for sure, and was proud of myself for catching some (but DEFINITELY not all) of the symbolism.

I also saw the new live action Beauty and the Beast. I liked it. I always enjoy films and plays that the cast clearly had fun making. Ewan McGregor’s French accent was endearingly horrible. Emma Watson is a cutie. They went a little overboard with the CGI, particularly during Be Our Guest (it was pretty cringey) but overall it was an enjoyable little movie.

Also, I got Hulu Plus for a month because I was so excited for the Handmaid’s Tale and also I had a new email I could use for a free trial 😀 This is the part where I confess I’ve been watching a stupid amount of TV in my periods of funemployment

Shows I’m not embarrassed to watch:

Shows I’m embarrassed to watch but do anyway:

One does not watch podcasts per se, but I also want to give a shoutout to the Jillian Michaels Show. I’ve never been a big Biggest Loser watcher, but I’ve grown to really love this podcast. She gets awesome guest stars (like an endocrinologist who gets into the science of the pros and cons of using birth control pills for various health conditions; a FBI expert who talks about using body language for women to establish dominance in the workplace; a financial expert weighing in on whether to put more money into your student loans or your 401K). I also just enjoy the banter between Jillian and her friends.

I’m literally years behind on it (I started listening to it from the beginning) but want to give a strong recommendation to listen to episode 96, on which Dan Savage guest stars (note that Savage is a sex columnist so it’s fairly R rated). They chat about pornography and Savage talks about the lessons he tried to teach his teenage son. He says that basically the common vile stuff you see in mainstream porn is designed for men who are angry at women. They are getting rejected by women (maybe they lack social skills to make real connections with them), and as a result when they seek out this form of sexual stimulation they’re seeking out something in which women are being punished for rejecting them. Dan Savage says it better than I can repeat here- it’s worth a listen.

Aside from UNC’s win, I have a personal victory to celebrate.

You may recall this angst filled post when I discovered I had elevated HbA1c- a test of long term blood sugar control indicating that I had insulin resistance (likely caused by my PCOS) and was prediabetic.

Welp, roughly a year and a half later, without medication, just diet, exercise, and inositol supplements, I’m back in the normal range! I dropped my darn blood sugar! As a dietitian, it feels really good to know that nutrition works! It also feels good to carry this with me to my clients- it somehow makes me seem like less of a fraud as an RD, hahaha.

Also, I counseled a friend-of-a-friend (unpaid, just casual and between friends) on nutrition on Friday. She had appreciated a post I’d made in a Facebook group of which we are both members about exercise and diabetes, and asked for some nutrition recommendations. So I did an assessment for her, and we talked through some lifestyle modifications and made a meal plan. And it felt SO GOOD to use these skills I have!

So next plans (while I play more of this eternal waiting game about jobs) are to chat with my cousin, who’s an attorney who works mostly with small businesses, about setting up a little LLC to do some private practice. Even if I just get referrals by word of mouth from friends, it’d be nice to just have a few evenings a month helping people in my community make positive life progress with good nutrition!

What’s new with everyone else?