I had big plans to give people outside the medical field this dramatic look into the world of the hospital. Throw open the curtain- guys, it’s not like Grey’s Anatomy. (Well, hopefully no one actually thought it was like Grey’s Anatomy. All of the shenanigans in on-call rooms? Guys, hospitals are gross. No one wants to get naked in them.)

Anyway, of course I have gone too long without blogging and now the summer internship seems like a blur. So I’m going to start with a glimpse of what I’m doing now! And then rewind a bit for a bit of curtain-throwing-open based on my summer experience 🙂

This fall, I am interning with a NICU dietitian for ten weeks! Note that this little subtitle says FINAL internship (!) That’s because once these ten weeks are done, and my master’s paper, which I’ll be doing concurrently, is submitted, I will be a GRADUATE! With a MASTERS DEGREE, aagh!

I’m happy to report that my preceptor is a BOSS. She divides her time between medical nutrition therapy for the tiny NICU babies (lots of critical care stuff), serving as a lactation consultant for mamas with NICU babies, and doing awesome research, including the study that basically made her a STAR, this very cool study about increasing breastfeeding rates in NICU mamas.

Y’all have maybe heard me talk about all my experiences around breastfeeding mamas and breastfeeding promotion. It’s always something I’ve loved. And now it seems like despite my reservations about it (are you qualified to tell someone what to do with their boobs when your boobs haven’t done it themselves?) I have started enough down the pathway to be a lactation consultant that it seems silly to not continue at this point. For example, Tuesday through Thursday of last week I attended the North Carolina Lactation Educator Training Program, receiving hours of lactation-specific education.

Eating taco salad and reading about breast anatomy. As one does. 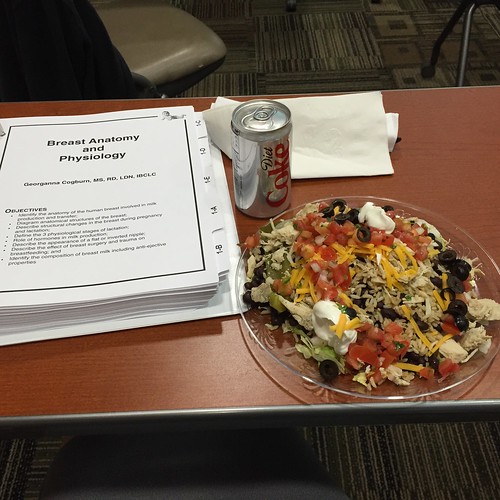 One of my favorite parts of the experience was learning the fairly bizarre history of breast pumps. The original one was essentially a bicycle horn with a suction cup attached (good luck collecting milk; it held about a tablespoon at a time). The next generation was similarly depressing and REALLY difficult to squeeze: 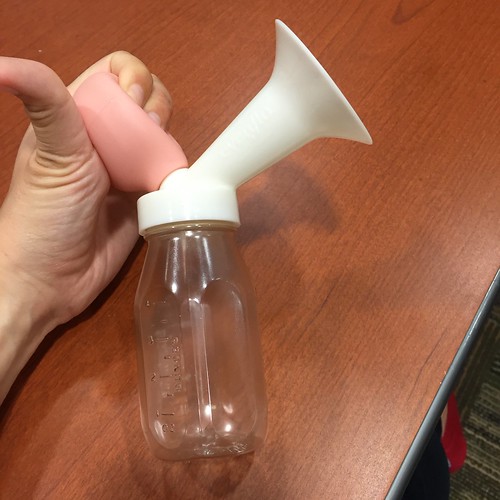 My favorite was this nintendo number here. Eeesh! 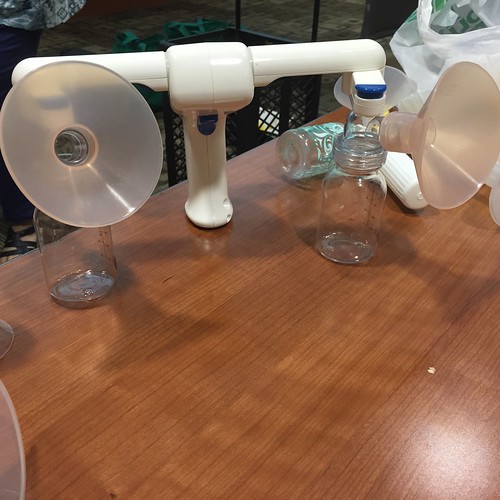 This training ended up being fortuitous timing, since my cousin had herself an AWESOME little human in the middle of my training! 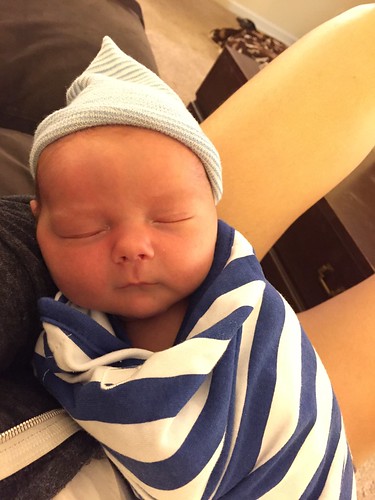 Little Chase is already one of my favorite people. My knowledge and skills are still questionable but with (or in spite of?) my help, my cousin is busy feeding this cute little nugget and getting him all big and strong.

I’m excited to see what the remaining ~7 weeks of my fall internship will include. I’m going to be co-authoring (!) a paper my boss is doing on human milk feeding and neurodevelopmental outcomes in premature babies. I’ll be joining the medical team on rounds in the NICU and making recommendations on feeding the little bambinos. And I’m going to continue to try to cultivate my lactation skills to try to attain even 10% of the knowledge of my preceptor (she’s been a lactation consultant for 16 years and is seriously awe-inspiring).

In the meantime, I want to reflect about my prior three months, loving the seaside and getting to know hospital life.

My program has its dramas, but I really felt like where they put me this summer was about them knowing me and my academic needs better than I know myself. I feel SO LUCKY to be at the hospital where I was with the team that taught me. My manager was great. The other dietitians were so intentional and generous with their teaching and taught me a ton; they also taught me how to keep learning and were ongoing learners who were constantly trying to increase their own skills and knowledge.

Meanwhile, the hospital was the perfect size for me. My friends who were at GI-NORMOUS teaching hospitals sometimes got a little lost in the crowd, and the professionals there were used to providing educational experiences for medical students and residents that they weren’t really going to go out of their way to provide something for a dietetic intern. My friends at teensy hospitals didn’t get to see many specialties, and anyone with an illness that was super serious (aka super interesting) got transferred out. So my hospital was the SWEET SPOT in the middle of those. I got exposed to so many cool specialties. I got to see someone get a hole punched into their abdomen to insert a feeding tube into their stomach. I got to see the view from a camera down someone’s throat to see how their swallowing worked. I got to see a guy’s SPINE wide open.

Thoughts on other people in the hospital:

Did you not want to end up sick in the hospital? Here are some fairly effective ways to stay out of the hospital:

Those are my thoughts! Questions on hospital life?

Also this has nothing to do with the rest of the post but also YOU’RE WELCOME: Lola had her kittens! Not only has she been an incredible mother to them, she is an incredible foster mother! Let me explain: my sister went on Facebook and saw someone had posted in the UNC group that she had found a woeful little kitten all alone in a storm drain! Because my mother was foolish enough to raise her children with compassion, my sister realized that the only logical choice was to hasten a planned trip to Virginia and leave in the middle of the night to deliver this kitten to (hopefully) a loving foster mother.

Because Lola is the BEST CAT IN THE WORLD, and BEST MOTHER IN THE WORLD (well best mother cat; my mother is the best mother human, who herself is doing a VERY generous thing fostering Lola!) she adopted the little kiddo like he was her own.

One of these kittens is not like the others! 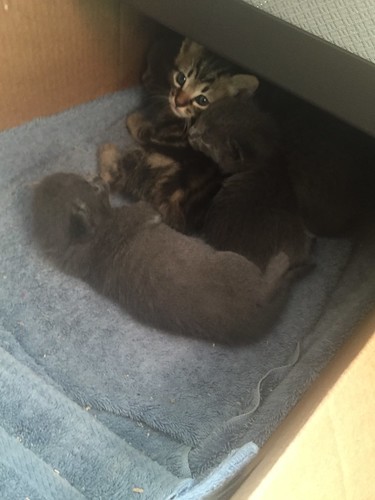 But Lola does not mind. Little kitten can still join the snuggle box. 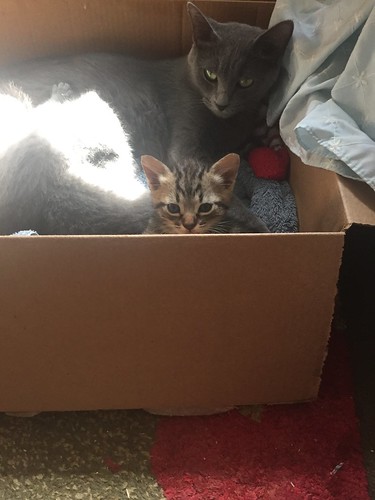 The little guy is a little older and thus a little more playful than the other kittens. My sister has named him Clovis. Clovis enjoys biting and pouncing. 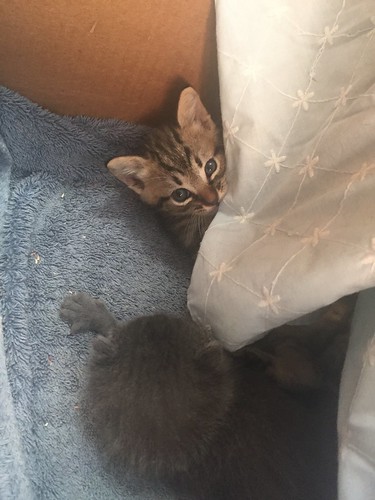 He also loves his mommy, as do his adopted brothers and sisters. 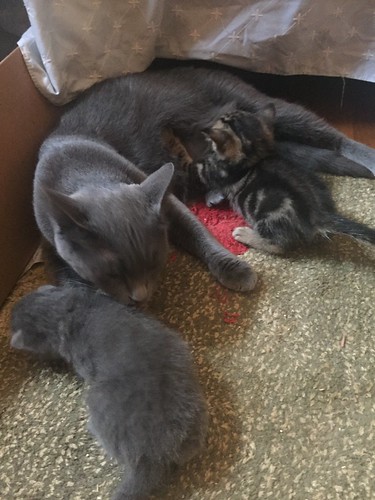 With all the breastfeeding promotion work I am now doing, I am definitely going to find a good place to use this picture. 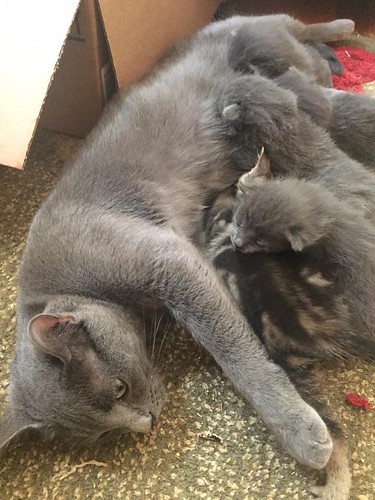